The press has had their hands on the new Chevrolet Corvette Z06 for a few months now and it has been awarded its fair share of accolades in this short time period, no surprise at us all.

This one was a bit of a surprise to us though, Top Gear Magazine which is one of our favorites, awarded the 2015 Chevrolet Corvette Z06 its “Muscle Car of the Year” and host Jeremy Clarkson picked the Corvette as his favorite new car for 2014. His co-hosts James May and Richard Hammond went for the hypercars, the La Ferrari and Porsche 918 Spyder respectively.

According to Top Gear: “Go to the outer edge of your personal comfort zone, and the Z06 will meet you there. It’ll trade blows with the best that AMG, BMW, Ferrari or Porsche has to offer, on the trickiest tracks in the world. It’ll make you feel like a million dollars, but costs a fraction of that. America has a new hero.”

In the video above we get a short but very sweet “eargasm” of the all-new Corvette Z06 tearing up some pavement, and of course a healthy donut/burnout to satisty the little boy in all of us. If you’re looking for one for yourself check out the sweet selection here. 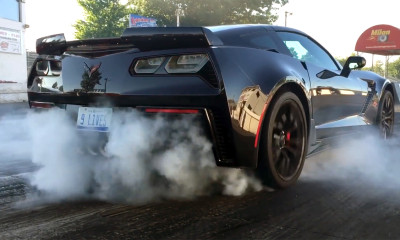